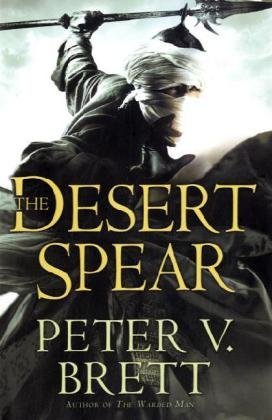 The Painted Man was a fantastic book. It builds up a world of lore and magic – and The Desert Spear builds so much more on top of it. Whereas The Painted Man followed several of the protagonists from a young age to the beginnings of adulthood, The Desert Spear covers a shorter period of time, apart from the first section which tells the history of Jardir.

At first I was a bit frustrated with the amount of time spent with Jardir, who we only met for a short while in the first book, because I wanted to get back to Arlen, Leesha and Rojer. But then I grew to really like Jardir. I grew to understand why he did what he did to Arlen in the first book, why he is like he is – and how he actually has a sense of justice, and is not just out to conquer the world and look down on others like the majority of his people appear to. Although he is rather prejudiced to begin with, he slowly starts to realise that maybe his people can learn something from the chin, or Northerners. I really loved his relationship with Leesha, it showed a softer side of him and I was glad that Leesha was finally thinking about herself for once.

One section that I particularly enjoyed was the battle at Deliverer’s Hollow from Jardir’s point of view, when he first visits. It was just really interesting to see these characters I’ve come to know through the eyes of another. And Renna’s transformation! From a meek, scared young girl to a bloodthirsty warrior – I really like that she is very strong in that way, after all she’s been through.

All in all, it was exactly what I was hoping it would be and more, now just to wait until next February (I believe) for the third book!