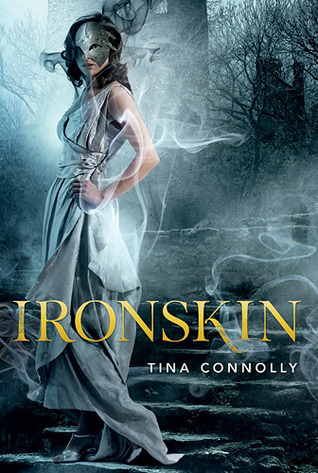 I recently re-read Jane Eyre for the first time since school, and it was like reading a completely new book. Without the need to analyse every scene, I was completely and utterly wrapped up in this world, following Jane’s story and heartbreak. I couldn’t get enough of it: I read the book in two days, I watched the Mia Wasikowska/Michael Fassbender film adaptation twice in those same two days, and listened to the soundtrack of said film on repeat endlessly. And that was when I remembered: I had this book on my Kindle, a paranormal retelling of Jane Eyre.

So it was with great excitement that I dove into Ironskin, hoping to rediscover some of those feelings and familiar moments. And whilst Ironskin is a retelling, it doesn’t stick quite so closely to original events as you’d think, and Tina Connolly plays really cleverly on Brontë’s work. In Jane Eliot’s world, fairies and other creatures such as dwarves are real – but fairies are most definitely not the cutesy little magical beings we know from fairytales. Five years previously, there was a Great War between the fairies and humans, and many people were killed or injured. Those injured by the fairies become cursed – Jane’s particular curse is rage – and she must wear a mask of iron to keep the rage in.

Whilst Jane is not a penniless orphan, as the original Jane is, she is an outcast in her own way. She is Ironskin, which immediately pushes her to the edge of society. She has a younger sister who is the total opposite – where Jane is plain, quiet, conservative but also strong-willed, Helen is outgoing, fun-loving and very much determined to integrate herself into high society. She is a representation of how important these people perceive appearance to be. There was definitely much more of a focus on Jane’s appearance in this book – in the original Jane Eyre she is occasionally referred to as being rather plain, but Brontë doesn’t dwell on it. However, in this one, Jane becomes a little fixated on her appearance and there were a couple of moments where it felt like she’d moved on from being this sharp, witty and fiercely independent character, to someone more like her sister.

Rochart was a lot less fickle and mysterious than Mr. Rochester. It was obvious that he had feelings for Jane, he wasn’t constantly pulling away which I felt left a lot to be desired with the romance. There just wasn’t very much chemistry between the two – why is Jane interested in him? Because he’s the only male she knows? I also didn’t understand how she was so surprised by his ‘big reveal’, when half the book had pretty much given it away. Hint: it’s not a mad wife in the attic. The ending also felt a bit… lacklustre. Although it was a big event with lots of action, there was just something missing.

However, I really did enjoy this book. It may follow the events of Jane Eyre and take plenty of inspiration from it, but it’s also very much its own story. I guess it’s a big task to try and live up to the original book, but Connolly gets close. There were plenty of little references in the story – like the room where Rochart and Jane meet is the ‘red room’, and when Jane has to go away for her sister’s wedding Rochart says he was expecting a ‘madeup story about a dying aunt’. My favourite thing however, was how in the original book, Mr. Rochester is constantly referring to Jane as an imp or a fairy, and when she meets him outside Thornfield he asks if she was ‘waiting for her people’. This took that idea and expanded on it hugely – to great success.