This post is part of Sci-Fi Month 2014, an event hosted by myself and Oh, the Books!. You can keep up to date by following @SciFiMonth on Twitter, or the official hashtag #RRSciFiMonth. 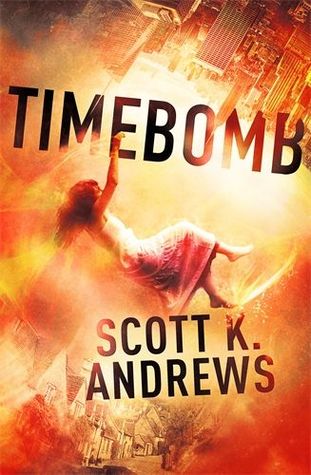 TimeBomb was certainly a fun read. Throwing the reader into this crazy revelation of time travel along with the characters meant it got straight into the action, no holds barred. And despite its super speedy pace, I was given a strong impression of each of the three protagonists almost right away.

Dora is naive and sweet, but stubborn. As a girl from the sixteenth century who is suddenly thrown into the twenty-first, she obviously has a lot of questions, but she learns fast. She’s sharp and witty, and was definitely my favourite of the three. Kaz is kind-hearted despite his difficult past, and although he lacks confidence he seems to grow throughout the book. Finally, Jana, the girl from the future, oozes confidence but was quite frankly a little annoying and blunt.

For a fairly short book, the story seems to cram in several genres: science fiction, historical fiction, adventure and thriller. It was pretty exciting how the three protagonists occasionally encountered their future selves in a variety of situations, allowing the reader to take a guess at what might come next. I also really appreciated one of the characters pointing out that they shouldn’t leave future objects in the past, to avoid confusing archaeologists!

However, the concept behind the time travel seemed like a really lazy explanation, and the way the three actually travelled through time just struck me as… odd. At times, the fact that they could time travel was a very overused deus ex machina. And despite the fact that you’d imagine a world in which you can time travel would feel huge, it actually felt strangely small.

Whilst I enjoyed the book, the conclusion was frustrating and I didn’t much care for the time travel explanation. Regardless, I think I would pick up the second book in the series when it comes out, just to see how Dora copes, although it won’t be my highest priority!