This post is part of Sci-Fi Month 2014, an event hosted by myself and Oh, the Books!. You can keep up to date by following @SciFiMonth on Twitter, or the official hashtag #RRSciFiMonth.

Today is a special occasion – I’m hosting one of my best friends, Kleo, on the blog! She’s written a review especially for Sci-Fi Month. 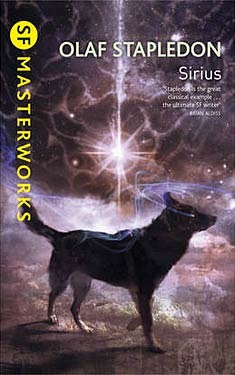 Hi everyone! I’m Kleo and I’ve been friends with Rinn since we were 9 years old. Rinn and I share a love for sci-fi and when she asked if I would like to write on her blog as part of Sci-Fi Month, I couldn’t wait to pick a book and get reading.

Whoever thought a story based in rural Wales could be the basis for a really good science fiction book? I never would have, until I read the story of Sirius. The story follows Thomas Trelone’s scientific experiment (a Super Sheep Dog named Sirius) as he grows up. The book examines his relationship with the Trelone family and the many ups and downs of being an oddity.

From the book, I really enjoyed the idea of an animal of smarter intelligence. I remember being really interested in Planet of the Apes as a child, and the idea of an animal that humans often treat as inferior to them being in a place of power. Another thing that was really great about this book, was the amount of detail Stapledon went into about Sirius. I work in Mental Health so I found Sirius’ way of thinking incredibly interesting. At points the details led to me feeling really tearful, not something that I can say has happened often! My favourite part of the story was the telling of Sirius as a sheep dog. I will leave it there as I don’t want to spoil it for you!

On the flip side, I found certain parts of the book somewhat unbelievable. As this story seems to be based in reality of the time some of people’s responses to Sirius left me feeling somewhat confused. Without giving too much away I found one scene gave the complete opposite reaction to what I would have expected. He was accepted as a curiosity, whereas I would have thought people would have reacted in horror. I also found Plaxy the other main character’s attitude to Sirius really annoying and at times where I wish I could have shouted at her. I’m guessing it’s what Stapledon wanted the character to be but at the same time it was definitely a disadvantage to the book for me.

I feel this book would suit anyone who enjoys psychology of animals and people who like science fiction based in the real world. From start to finish I was absolutely fascinated by Sirius’ story and related to his struggles of being misunderstood growing up. On Goodreads I gave Sirius five stars because it really surprised me. I just wasn’t expecting the book to be this good. If you ever have chance to read it please do. I will be giving Rinn my copy to borrow once she is home for Christmas.