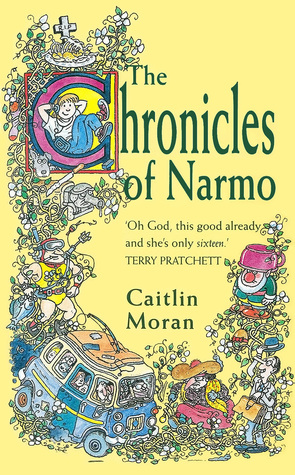 Having first read Caitlin Moran’s How To Be A Woman a few years ago, I was definitely intrigued to read something that she had written at the age of only sixteen. Her previous writing showed that she is one incredibly funny woman, and as The Chronicles of Narmo shows, she was also an incredibly funny teenager.

A semi-autobiographical look at the life of the ‘Narmo’ family, there isn’t much of a plot to the story – just that Morag’s mother decides to take her and her siblings out of school and educate them at home, which leads to much tomfoolery and many shenanigans. There is no clear plotline and it is more like a series of events patched together, but that didn’t really matter when I considered the writing. I just cannot believe that Caitlin was only fifteen/sixteen when she wrote this – the descriptions are vivid, wonderful, odd and just so unique. Take this one for example:

“Bill smiled a smile last seen on a piranha with toothache that has just eaten the last dentist in the Amazon.” The Chronicles of Narmo, 32%

I just can’t imagine writing like Caitlin did at the age of sixteen as I am now, in my twenties. She has clearly always had a great talent. This is the kind of book that you can’t really compare to many others due to the author’s age at the time, and it is really very astounding all things considered – I mean just look at the quote from Terry Pratchett on the front cover! Her view on the world and her environment are, for a teenager, actually incredibly mature, and she is not afraid to really make fun of herself.

If you’re a fan of Caitlin Moran, definitely give this one a try for more of her wonderful wit and humour.

1 thought on “Review: The Chronicles of Narmo by Caitlin Moran”