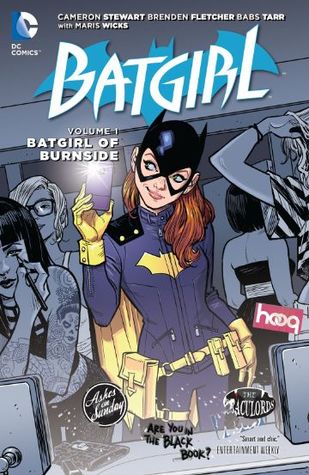 I’ve always been a big fan of superhero stories, but it was only in the past year or two that I started reading Marvel comic books properly, and now I feel quite well-versed in the various arcs and characters. But, until now, I hadn’t read a single DC comic. I saw this on Netgalley and thought the start of a brand new series would be a good place to start, plus Batgirl was a character I was also vaguely familiar with.

The Batgirl of Burnside follows Batgirl as she struggles with balancing life as a graduate student and her secret identity. Hackers are targeting a popular dating/friend app, which pretty much everyone in the city uses, and to add to this someone is impersonating Batgirl and trying to ruin her reputation.

Barbara Gordon as Batgirl first appeared in 1967, so it is understandable that some of her comics would appear to feel dated. This new series very much brings Batgirl into the present day – smartphones, social media, online dating – but this could also serve to isolate some of Batgirl’s older fans, those who have been following her for a long time. For me, as a new reader and someone used to such technology, it wasn’t an issue, but I could see how it could be for some fans. What I did like was that the technology wasn’t just throw in to appeal to a certain demographic – it was an integral part of the story.

My main issues with this volume were the odd mix of made up and real pop culture, the cliche of a cop/authority figure boyfriend who disapproves of our protagonists secret identity without realising who it really is, and one particular villain who talks in hashtags… That last one seemed a bit too much.

But the art was gorgeous, the colour palettes a wonderful blend, the story fun and fast-paced, and every character looked unique. The action scenes flowed seamlessly from one frame to the next. Taking a brief glance at reviews of this book on Goodreads shows that the previous DC readers don’t seem to be quite so impressed with this addition to the series, but for me, as a new reader of DC comics, this was a great introduction to its universe. One or two characters were familiar from the television series Arrow, but almost everything was new to me, and at no point did I feel at a disadvantage.

A fun, fresh update on the Batgirl story, definitely a great entry point for those wanting to get into DC Comics but unsure where to start.