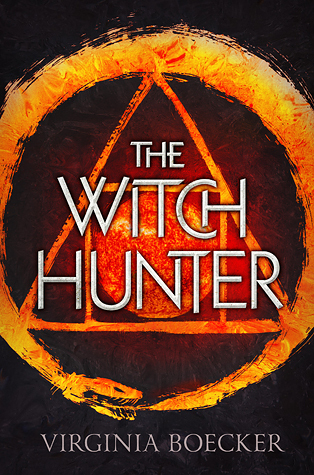 I was really excited to read The Witch Hunter, the first book in a new series by Virginia Boecker. I just can’t resist tales of witches, wizards and magic, and alternate history really appeals to me. And whilst The Witch Hunter was a fun, fantasy romp, it was rather predictable and unfortunately included a rather insufferable main character.

The reader is told that Elizabeth is an amazing witch hunter, one of the youngest ever and a female witch hunter to boot. Yet throughout the book she never really proves herself. The story opens with Elizabeth messing up a hunt, when she is sent to capture necromancers. We are then told of how she recently made a lot of mistakes. The reason for this is soon revealed, but at no point did I feel she deserved her status as a talented witch hunter.

I also really was not impressed with how she practically took a disliking to every female character she came into contact with. She even imagined pulling the ex-girlfriend of her crush by the hair – I mean, really?! How old are you? So as well as being naive and clumsy, Elizabeth is also judgmental and a lot of the time I just wanted to push her off her high horse.

Also – love triangle. Well, sort of. Elizabeth pines after two guys – her childhood best friend who is quite frankly an utter arse, and a healer that she meets after being accused of being a witch. There was a lot of wondering about her feelings and trying to ignore them, and honestly I couldn’t care less about the love interests. I was much more interested in the magic, and why it was forbidden – which was never actually explained, now I come to think of it.

The first 15% or so of the book went by very quickly – but that was also where the majority of the story happened. It slowed down significantly after that, although it was still enjoyable and easy to read, if predictable in places. I really liked the pseudo-medieval alternate England setting – at least that’s what I assume it was, being set in ‘Anglia’ with ‘Gaul’ across the Channel. Or rather, I liked the idea of it, as the world-building did not feel very detailed. This is a ‘I had higher expectations’ three stars, but chances are I will end up reading the sequel – not for Elizabeth, but for the magic and alternate England.