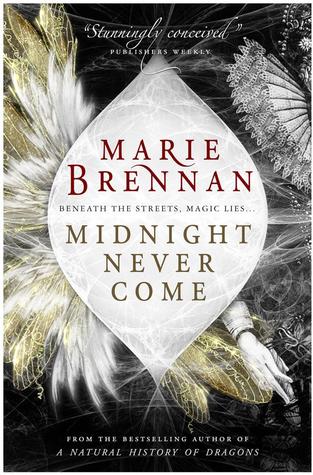 Oh, what high hopes I had for Midnight Never Come. Having read Anne Lyle’s The Alchemist of Souls in October last year, I was smitten with the idea of a fantasy Elizabethan court. There’s something about that particular era that really lends itself to the idea of magic and faeries, so when I was offered a copy of this by Titan Books I snatched it up. Sadly, I found it to be lacking.

I know I enjoy Marie Brennan’s writing – A Natural History of Dragons was excellent. But with Midnight Never Come I often found myself tuning out and not concentrating on the story a little too often – I just never quite got into it. The time skips were also really disorientating, jumping here and there very suddenly, and I had no real sense of how much time had actually passed in the story. I didn’t feel attached to a single character, neither fae nor human, and none of them felt particularly developed.

I had two main issues. The first was the name of the faerie queen: Invidiana. I had to say it so many times out loud to work out how it was pronounced, and still I’m not sure – any way sounds weird. In-vid-ee-ana? In-vid-ee-ah-na? I don’t know, and every time I came to the name in the book, I had to pause. And my second issue: when it is revealed whom Lune, the main fae character, has been disguised as in the human court, it didn’t mean anything. I hadn’t had enough time with this human character to know anything about her or suspect what was going on.

Whilst I love love love the idea of a fae court underneath the human Elizabethan one, this just did not work for me as well as I expected. I’ve given it three stars – but it’s more of a ‘disappointed’ three stars than a good, solid rating.