Darrow would have lived in peace, but his enemies brought him war. The Gold overlords demanded his obedience, hanged his wife, and enslaved his people. But Darrow is determined to fight back. Risking everything to transform himself and breach Gold society, Darrow has battled to survive the cutthroat rivalries that breed Society’s mightiest warriors, climbed the ranks, and waited patiently to unleash the revolution that will tear the hierarchy apart from within.

Finally, the time has come.

But devotion to honor and hunger for vengeance run deep on both sides. Darrow and his comrades-in-arms face powerful enemies without scruple or mercy. Among them are some Darrow once considered friends. To win, Darrow will need to inspire those shackled in darkness to break their chains, unmake the world their cruel masters have built, and claim a destiny too long denied—and too glorious to surrender. 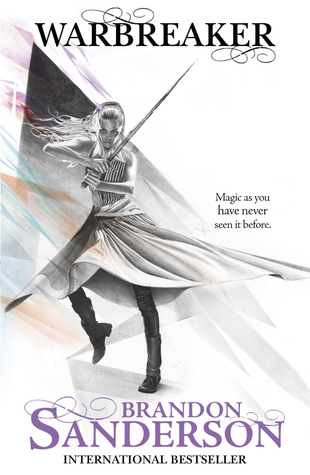 Warbreaker is the story of two sisters, who happen to be princesses, the God King one of them has to marry, a lesser god, and an immortal trying to undo the mistakes he made hundreds of years ago.

Theirs is a world in which those who die in glory return as gods to live confined to a pantheon in Hallandren’s capital city. A world transformed by BioChromatic magic, a power based on an essence known as breath. Using magic is arduous: breath can only be collected one unit at a time from individual people.

But the rewards are great: by using breath and drawing upon the color in everyday objects, all manner of miracles and mischief can be performed.