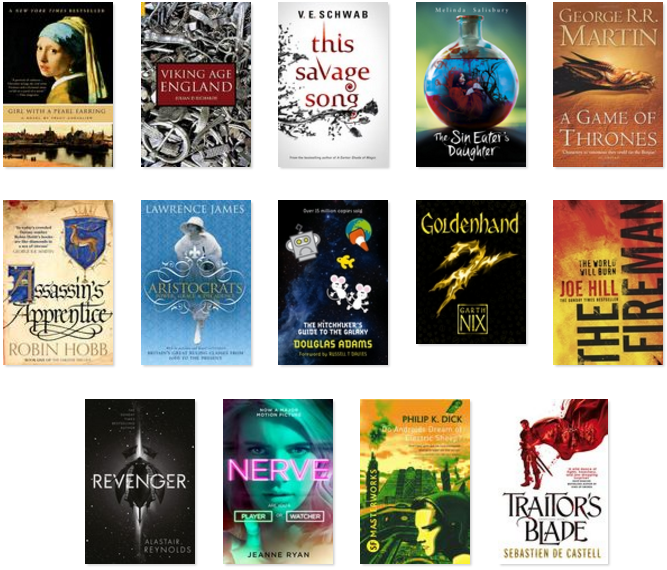 Last month I read a total of fourteen books: Girl With A Pearl Earring by Tracy Chevalier, This Savage Song (Monsters of Verity #1) by V.E. Schwab, The Sin Eater’s Daughter (The Sin Eater’s Daughter #1) by Melinda Salisbury,
A Game of Thrones (A Song of Ice and Fire #1) by George R.R. Martin, Assassin’s Apprentice (Farseer Trilogy #1) by Robin Hobb, Aristocrats: Britain’s Great Ruling Classes From 1066 To The Present by Lawrence James, The Hitchhiker’s Guide to the Galaxy (Hitchhiker’s Guide #1) by Douglas Adams, Goldenhand (The Old Kingdom #5) by Garth Nix, The Fireman by Joe Hill, Revenger by Alastair Reynolds, Nerve by Jeanne Ryan, Do Androids Dream of Electric Sheep? by Philip K. Dick, Traitor’s Blade (Greatcoats #1) by Sebastien de Castell and Americanah by Chimamanda Ngozi Adichie.

I have to say, October was a really great reading month. I managed quite a few books, and half of them were 5-star reads. I re-read two books this month: A Game of Thrones (which I have been meaning to re-read for about five years) and Do Androids Dream of Electric Sheep?. It’s really hard to pick a standout because so many were amazing: Goldenhand, Greatcoats, Americanah, This Savage Song… not to mention my first ever Robin Hobb novel, Assassin’s Apprentice. Basically I would say read them all!

How was October for you?