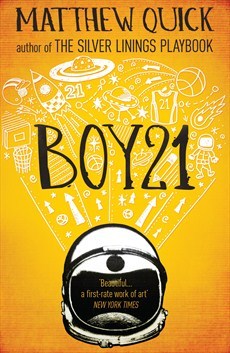 I’ve noticed a formula with all of the Matthew Quick books I’ve read so far. They all feature:

So far this formula has worked very well for Quick – and Boy21 is no exception. It’s very much his writing – simple yet unique, thoughtful and very centered around character development. When we first meet Finley, he tells us the short, sweet story of how he met his girlfriend, Erin. They have known each other since they were kids, and their relationship to me felt so genuine. They’re so supportive of each other with their basketball careers. The one element I didn’t quite understand of their relationship was that they broke up every basketball season, then got back together after. I understand why, so they wouldn’t distract each other, but I don’t really understand how they could do it if their relationship was so great. Or maybe that’s the point, they’re so trusting and comfortable with each other that they know three months not even talking each year will be fine?

Russ’ introduction, on the other hand, was crazy. And very sad. Convinced that he is in fact an alien called Boy21, who will be ‘collected’ by his parents in a few months, he refers to Finley as ‘Earthling’ and asks him questions such as where his ‘dwelling pod’ is. Neither Finley, nor the reader, know whether Russ is actually convinced that he is an alien or whether he has just put up this very elaborate front to try and keep the pain of his parents’ murder away – and it’s heartbreaking. In his more lucid moments, Russ proves to be a great friend, and in a strange role reversal, manages to coax Finley out of his shell.

Although Finley was at times a rather spineless character – his main ambition seemed to be to follow Erin around wherever her basketball career might take her, and stay with her for the rest of his life – he was a genuinely selfless guy, prepared to help out Russ, even if his very presence threatened one of the things that meant most to Finley – his place on the basketball team.

Overall, a wonderful story about how different people deal with loss, and a great coming of age tale. My main complaint was that I was bit lost amongst the basketball terminology at times, but that’s about it! A definite recommendation for anyone who has previously enjoyed Quick’s works, as well as those of YA contemporary authors such as John Green.

I’m still reading Marvel comics! There are suddenly a lot more available on the county library system, so I’m making use of it while I still can. My standout book of the month was definitely Blood and Beauty by Sarah Dunant, about the Borgia family. I find them fascinating, and this account of their lives (albeit partly fictionalised) was just brilliant. Brave New World was my book group’s Sci-Fi Book of the Month – unfortunately I didn’t get round to our fantasy choice, but I’m hoping to read it this month.

June has been STRESSFUL – hence a lack of posts towards the end, as well as lack of commenting on other blogs. If you saw my post on accommodation last week – well I think it’s sorted. I’ve finally been able to reserve a room. But the email says they’ll let you know at the latest five days before the move in date whether it’s approved. FIVE DAYS?? What if you get rejected? I expect they rarely reject anyone unless they’re not a student and have somehow got through the system – but WHAT? What if you’re rejected, how do they think you’ll find somewhere else in five days, because all other student accommodation will have gone by then. Ugh. Well… if all goes to plan, I have myself my own little apartment in Leiden. A little further than I thought from the faculty, about a 10-15 min bike ride/25 minute walk to the centre, but it’s somewhere to live! And an actual apartment to myself. And of course I’ve nosed around the area on Google Maps, and it looks lovely 🙂 Now that it’s sorted, I feel like I can get on with making other arrangements for Leiden.

Oh, and I also discovered a new love for Jane Eyre, which I re-read for the first time in seven years after reading it at school. I watched the newer film version with Michael Fassbender and Mia Wakowski, and the soundtrack is just GORGEOUS.

How was June for you? Hopefully less stressful than mine!