This book was chosen as the Fantasy Book of the Month for February 2014 by my book group, Dragons & Jetpacks, and thank goodness it was – I would have taken a while getting round to reading it otherwise.

The synopsis above doesn’t really do the book much justice, in fact it makes it sound like a pretty generic fantasy novel. Which this is definitely not. Whilst it may have some of those common fantasy fiction tropes, it also has plenty of content that makes it totally unique – not to mention Sanderson’s brilliant writing that just keeps dragging the reader further in.

The story is mostly shown through the (third person) eyes of Vin, a young girl living with a street gang. Due to her way of life, she’s reserved and nervous around others, and thanks to some advice from her brother, doesn’t trust a soul. At the beginning of the book I found her a difficult character to connect with or even to understand; she was just as withdrawn from the reader as she was from the other fictional characters around her. However, that all changed when she met Kelsier. A Mistborn, meaning he can use all forms of Allomancy, Kelsier helped Vin to come into her own powers. It was as she learnt to control her own strength that Vin really opened up and developed as a character. She became more confident, comfortable around others and much more likeable. It’s not that her shy self was disagreeable, it’s just that she was hard to feel any real emotion for.

Allomancy was one of my absolute favourite things about the book. A type of magic that relies on metals, Sanderson has created a brilliant and truly unique system. Most people can only ‘burn’ one or two metals, and their powers depend on the types of metal – but some people, known as Mistborn, can use all. The way that Kelsier and Vin can practically fly around the city, using their Allomancy to Push and Pull themselves away and towards metal objects summoned up the most epic mental images, and I just absolutely loved the idea of how they could use their powers. The book, although very enjoyable before, really picked up when Vin began training.

And now for the few things that bugged me. One was Elend Venture, the object of Vin’s affections. I just don’t understand the appeal of Elend – he was a foppish, spoiled brat. The only way I would understand it is if there is a Scarlet Pimpernel type reveal in the next book, where we find out that this rich boy image was just a facade. Here’s hoping! The other minor annoyance was the way one character (Spook) spoke: I get that he wasn’t from the same country as the others, and that his native tongue was different. But his garbled speech was REALLY difficult to read sometimes and it annoyed me.

However, Sanderson produces some shocking moments and makes some controversial decisions that work really well – as well as crafting a wonderfully told story packed full of detailed world-building and well developed characters. I completely and utterly loved this book – and Allomancy most of all. A definite recommendation, particularly for fans of epic fantasy – although I get the feeling most of you would have read this one already! 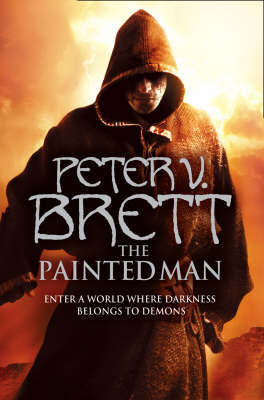 After finishing Mass Effect 3, I really wanted to read some sci-fi. So I went down to my local library, and browsed the (rather pathetic) sci-fi and fantasy section. I came back with four fantasy books, and just one sci-fi. Luckily, one of the fantasy books was this one, because it was amazing. I was first drawn in by the cover – rather mysterious – and then the blurb.

The entire concept of demons (or ‘corelings’) springing up out of the earth after the sun has set – or even when it is dark enough during the day, caused by storms and the like – really interested me. The people of this fantasy world live in fear of the dark, because there is actually something out there, and to prevent demon attacks they must ward their homes, businesses, cities etc, or travellers must create ward circles in which to hide at night. But the wards can be easily disturbed – washed away by rain, covered by snow or leaves, even just a person treading on one of the wards can break the circle. Everyone lives in constant fear, and no-one has the means, or courage, to face up to the demons. That is until Arlen finds a warded spear in the ruins of an ancient city, and using murals and the spear itself begins to recreate the wards, even going to far as tattooing his entire body – hence the ‘Painted’ or ‘Warded Man’.

I have to admit when I first opened the book and read that the main protagonist was a ten-year old boy, my heart sunk a little. I often get annoyed by such young protagonists, but Arlen really surprised me. He was clever and a realist, and very, very determined. And his transformation into the Painted Man was fantastic – strengthened by past losses, and desperate to not turn into his father. In fact, all three of the protagonists were very likeable and it was interesting to follow them from their pre-teens (or earlier, in Rojer’s case), to adulthood. I like Leesha for her sense of morals and her determination to live her life as she wanted.

Often with fantasy novels, the authors understandably want to create something new, a new world, but some times it can get very complicated. The Warding system was very understandable, and I can’t wait to find out more of its back story, along with the history of the Core and corelings – which I hope will be coming up in the next two books.

I really loved the pacing of the book. Brett didn’t switch between POVs too quickly, nor too slowly. It felt like just as something big was building up for each character, the POV would switch, which definitely kept me reading to find out what happened next. The action scenes were brilliant and fast paced.

As much as I love fantasy, I haven’t found too many series that have really gripped me. The Lord of the Rings and A Song of Ice and Fire go without saying, but I feel this series (trilogy?) could soon join them. I will definitely be looking out for book two, and book three when it is published – apparently February 2013.