Last month I read a total of fifteen books: Zeroes (Zeroes #1) by Scott Westerfeld, The Darkest Part of the Forest by Holly Black, Stolen Songbird (The Malediction Trilogy #1) by Danielle L. Jensen, Sorcerer to the Crown (Sorcerer Royal #1) by Zen Cho, The Young Elites (The Young Elites #1) by Marie Lu, Talon by Janet Lee Carey, Dangerous Days in Elizabethan England by Terry Deary, The Just City (Thessaly #1) by Jo Whalton, An Ember in the Ashes (An Ember in the Ashes #1) by Sabaa Tahir, The Graces by Laure Eve, The Winner’s Curse (The Winner’s Trilogy #1) by Marie Rutkoski, One Flew Over The Cuckoo’s Nest by Ken Kesey, The Dark Days Club (Lady Helen #1) by Alison Goodman, Knight’s Shadow (Greatcoats #2) by Sebastien de Castell and The Demon King (The Seven Realms #1) by Cinda Williams Chima.

December was definitely a great reading month! Most of what I read came from the library, stuff that I’d ordered in especially so I was excited for all of it. However, my standout books have to be The Demon King, Knight’s Shadow and The Just City. The Demon King felt like a classic fantasy novel, and just completely and utterly drew me in. Knight’s Shadow was a fantastic follow up to Traitor’s Blade, and The Just City was just so unique and really appealed to my archaeology and ancient history loving self.

How was December for you? 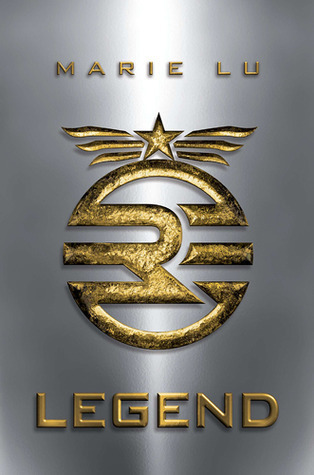 4 out of 5 stars | Goodreads
With the amount of Young Adult novels, particularly of the Dystopian/Post-Apocalyptic genre, being released in the past year or two, it is especially difficult to find the stand-out ones, let alone write one. But Marie Lu has managed to create something really fantastic with Legend, that definitely deserves its comparison to The Hunger Games.

I had seen this book on many a blog, with such strong praise and positive reviews that I immediately added it to my ‘to read’ pile. Combine that with the Hunger Games vibe, and I was sold. However, when my copy finally arrived from the library, I was initially put off by the blurb, claiming that June and Day are ‘irresistibly drawn together’. One of my pet hates – that occurs more often than not in YA novels – is insta-love. Insta-love that is so deep, the couple just know they’re going to be together forever from day one. No thank you. Lu also shows that there could perhaps be the opportunity for a love triangle, but takes that away – another thing I was very glad about!

So I was delighted to discover that it is not insta-love – but insta-attraction. Much more realistic, and not all consuming – June doesn’t spend her time pining after Day, or vice versa. They are both far too strong a character for that, and that is another thing I really enjoyed about the book. Both protagonists were street smart and intelligent, and didn’t let bad events get them down, but instead used them as a reason to work for a good cause. And whilst sometimes their strength might make them seem a little cold – mostly in June’s case – this is another good thing, as YA novels often suffer from flawless, or flawed in a cute way, characters. For example, there is one scene where June is witnessing something particularly horrible, and she merely watches without flinching. She is also, at least for the first half of the book, very snobby about the Republic, looking down on the Colonies and Patriots.

One element that Lu could have perhaps built on a little more was the reason why the world was like it was. What happened to divide the USA up? Why are there three main groups? Perhaps this is explained properly in Prodigy, the second book, and I will be reading it to find out. I was able to guess some of the rather important plot points, but there were also some truly shocking moments, that could certainly rival some of those created by Suzanne Collins’ Hunger Games trilogy. I didn’t find myself as emotionally invested in these characters though, and I’m hoping that this will change with the next book.

Overall, this really was a fantastic read, building up for what I believe could be an explosive trilogy. The ending was not quite a cliffhanger, but definitely left the story open enough for me to want more – and I’ll be ordering the next book from the library as soon as I’ve got through my stack of current library books!

And that’s all for this week! Have you read any of these books, and if so, what were your thoughts on them? What did you receive this week?