The TV series this week is: Firefly.

Five hundred years in the future, a renegade crew aboard a small spacecraft tries to survive as they travel the unknown parts of the galaxy and evade warring factions as well as authority agents out to get them.

One of my absolute favourite series, Firefly was sadly cancelled after one season due to low viewing figures. Since it was aired it has gained a cult following – sadly a little too late. A film sequel to the series, entitled Serenity (which I have the DVD of and STILL haven’t watched!) was released in 2005, and wraps up events. As well as the following recommendations, there are also many books and graphic novels based on the series.

I first heard of Avalon when Tory mentioned it during one of her Sci-Fi Month posts. I immediately thought it looked like the perfect book for fans of Firefly – it sounds like a teenage version, and Anya seems to agree according to her review! It’s about a group of teenage mercenaries who captain a ship, and steal to get by – which sounds pretty similar to what the crew of Serenity do! It currently has an average rating of four stars on Goodreads, so it’s doing pretty well!

So many of my science fiction loving friends have recommended Leviathan Wakes. It’s one of the books on the Dragons & Jetpacks Ultimate Booklist, a booklist created by my bookgroup where we have compiled all the science fiction and fantasy books we think everyone should read at least once in their lives (one nomination per genre each). Whilst the characters are the crew of an ice mining ship, a little different compared to Serenity, a major element of the plot is a crucial female character, whom the crew must protect from the authorities – a bit like River in Firefly.

Retribution Falls (Tales of the Ketty Jay #1) by Chris Wooding

Have you read any of these books? Do you have any to recommend? Are you a fan of Firefly?

Today as part of Sci-Fi Month, I’m discussing my top five spaceships in science fiction. Feel free to join in with the top five, and share your link in the comments. Don’t forget to check out the schedule for the rest of today’s posts. You can also Tweet about the event using the hashtag #RRSciFiMonth. 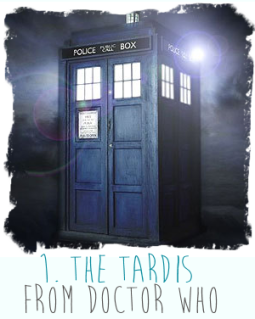 1. The TARDIS, from Doctor Who – Time and Relative Dimension in Space, this one is an obvious choice for me. Who doesn’t want a spaceship that’s bigger on the inside – imagine the library you could have in here! Although the Doctor does have one, but it might currently be part of the swimming pool… It’s such an iconic spaceship and also makes some awesome sounds.

2. The Normandy, from the Mass Effect series – technically there are actually two Normandys, SR1 and SR2, as the first is destroyed at the very beginning of Mass Effect 2. The Normandy is the main hub of the game, where you return to after each mission, and where you get to know your crew. Some of the best cut-scenes and interactions between Shepard and various squad mates take place on the Normandy. My captain’s cabin would be complete with a photo of Garrus on the desk, and a space hamster. 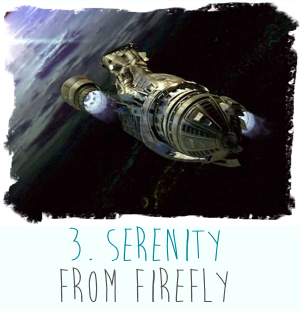 3. Serenity, from Firefly – if you’ve never watched Firefly, then do it. And then lament at the fact it was cancelled after only one season, despite being AMAZING. What I love about Serenity is how cosy it looks. Despite being a spaceship, the interior in most places doesn’t look very high-tech – the kitchen for example, looks like something taken from the 1950s, and Inara’s pod is decorated in silks and velvet. 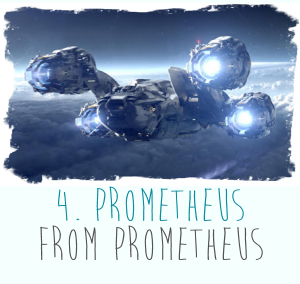 4. Prometheus, from Prometheus – if I had to pick between Prometheus and Nostromo, I would pick Prometheus. We see a bit more of the ship in the film than we see of the Nostromo in Alien, plus I just love how everything looks. The contrast between the silvers and blues of the ships interior, and the dark earthy tones of the alien planet works really well. Only problem is, the escape pod isn’t that great… 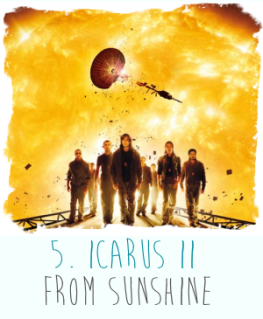 5. Icarus II, from Sunshine – I’m hoping at least some of you have heard of Sunshine, personally I think it’s a rather underrated movie. It’s set in 2057, and the sun is failing, so a crew is sent to set off a bomb and hopefully reignite it. And the spaceship that gets a little too close to the sun is wonderfully called Icarus, referencing the Greek myth of Icarus and Daedalus. What I especially loved about this ship was the greenhouse, lovingly tended by Michelle Yeoh’s character, used to maintain the ship’s oxygen levels.

What about you? What are your top five spaceships in science fiction?