I really wanted to like this book. I really did. It has such promise – after all, any Doctor Who fan knows that the Doctor has met many a historical figure on his travels. In fact, those are often my favourite episodes of the show – not the ones where he travels to the future, but where he goes back in time and we get to see recognisable figures from history.

I do believe, however, that this book will be a much more enjoyable read in hardback or paperback format. I read the eARC, which I highly doubt did it justice. Judging by the illustrations, which of course were in black and white for me, the book is very nicely presented. What I did like was how it didn’t just focus on the ‘new’ Doctor, but all of his other faces, and brought in companions old and new as well. Those who remember the times of Jamie and Zoe, as well as newer fans of Amy and Rory, will be happy.

Unfortunately, I think this book suffers from having a rather niche audience. Sure, it will appeal to Doctor Who fans, but ironically the Shakespeare element of it won’t work for all. Ultimately to me, it felt a little like an attempt to cash in on the ever-popular ‘crossover’ book, mixing characters from different fandoms (if you can refer to Shakespeare as such!).

As much as I love Doctor Who, and as much as I like to read anything about it that I can get my hands on, this sadly did not work for me. It feels more like the sort of book an ultimate fan would buy to complete their collection – it’s not one I can see myself reading again, unlike the adventure story series about the Doctor. 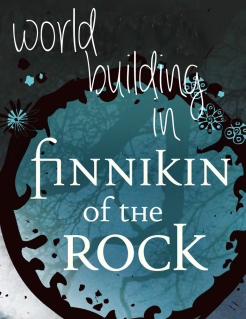 Today, as part of Paola and Charlene‘s celebration of Melina Marchetta’s The Lumatere Chronicles, I’ll be writing about world building in the first book, Finnikin of the Rock. I also recently reviewed the first book in the series.
I thought I would choose world building as my topic as I’m a big fan of many different fantasy series, each with their own worlds, cultures, peoples and religions. I’ve read about so many different kinds of fantasy lands, and believe that a big part of a successful fantasy novel is pulling off the world building. The author needs to create completely new concepts, yet still make them believable to the reader, and come up with new names that don’t sound ridiculous, yet sound different enough.
Skuldenore is the land in which The Lumatere Chronicles take place, split into eight different countries: Sorel, Charyn, Osteria, Sarnak, Sendecane, Belegonia, Yutland and Lumatere. Marchetta only really talks about a couple of the countries in Finnikin, and these are the impressions I got of them. 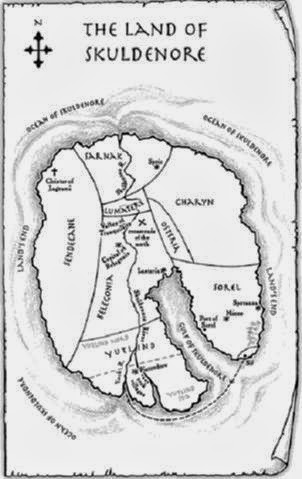 And of course, Lumatere. Lost to its people a decade or so before the beginning of Finnikin of the Rock.   The royal family are murdered, people attacked, the kingdom ruined. A curse is placed on Lumatere, trapping the people within who did not escape in time, and no-one knows what has actually happened to them. So the remaining people of Lumatere become refugees and exiles, spread out amongst the countries of Skuldenore. They are second-class citizens elsewhere, forbidden from speaking their native tongue and struggling on with life. Considering that Lumatere accepted people from all over, with no problems, it must have come as a shock to the Lumaterans.
Located in the centre of Skuldenore, its people vary in appearance apart from one feature – deep set eyes. The people are divided into five types, depending on where they are from within Lumatere: the mountains, river, flatlands, rocks or forest. Certain traits are also typically associated with people from the different areas, such as stubbornness. It is governed by a king or queen, and the large majority of the book is spent hunting for Balthazar, the rightful heir to the throne and believed to still be alive.

From the description of Lumatere in its hey-day, it sounds idyllic and seems to represent the ‘perfect’ kingdom: accepting of all, beautiful landscapes, bountiful harvests, a fair and good ruler, happy citizens.

“For a moment he allowed his memory to take him down a road lined with vineyards and olive trees. It was one he had travelled often with his father. Each time, he would climb the ridge overlooking the Valley of Tranquility and see the kingdom of Lumatere spread out before him. Villages of cobblestoned roads that rang with the sound of hooves, meadows lush with flowers, huts lined up along a river that snaked through the kingdom and pulsed with life… He could see his village in the Rock, his uncle’s smokehouse, where meat and fish hung from the ceiling, and the quarry where he would take Balthazar and Isaboe… And there, in the distance, the king’s palace, perched up high, overlooking their beloved people inside the kingdom walls and those outside in the Forest of Lumatere.” — page 49-50

There wasn’t a great emphasis on religion, but there is mention of two goddesses – Sagrami and Lagrami. As opposites, Sagrami appears to be a deity of darkness, worshipped by Seranonna who placed the curse upon Lumatere. Lagrami is the deity of light. The two opposite sides of the circle is a common feature in fantasy religions. It appears that the clergy of this particular religion are priests and priestesses, who live in cloisters – and that is where Finnikin and Topher find Evajalin at the beginning of the book. I did pick up one small feature of the religion – the priestesses shave off their hair on joining the cloister, and let it grow to signify their length of devotion to the goddess.
Unlike Tolkien, who built up a great back story and history for Middle-earth within his books, Marchetta tends to express Lumatere’s history through exposition. I actually really enjoyed these scenes, with various characters often explaining part of the country’s history to another, or favourite stories being retold to excited youngsters. I haven’t actually often encountered this method in fantasy writing – after all, isn’t it always said that you should show and not tell? – but with Marchetta’s wonderful prose it works.
As for the culture of Skuldenore, it seems to be very varied. I did feel a little like some of the countries were a bit stereotyped – for example a dry and arid land, with savages and a guttural tongues (Yutland). Each country is very different, with various political systems and potential allies. It is not just men that hold the power – female power is also represented, there are plenty of ladies and mentions of queens. So despite being a quasi-medieval system, women can wield power and authority in Skuldenore. Slavery is also present, at least in Sarnak where Finnikin and Evajalin pick up Froi – however, it was not legal in Lumatere – evident by Finnikin’s shock – further emphasising its status as a ‘perfect’ kingdom, and making its downfall even harder to bear.
For a fantasy world, there are few mystical beings or creatures, and little use of magic. There is, of course, the curse which Seranonna places upon Lumatere, and the prophecy that speaks of its revival, but that is all in the past as regards to the story. Evajalin’s dream walking could be classed as magic, but there isn’t much in-depth discussion about it. However, since the ‘Unspeakable’ – the slaughter of the royal family and curse on Lumatere – it is possible that the people of Skuldenore have become very paranoid about magic.
Also, I do wonder whether Marchetta had some inspiration from Shakespeare, particularly The Merchant of Venice. As children, Finnikin, Balthazar and Lucian made a pledge, sacrificing flesh to seal it.

Tarry a little; there is something else.
This bond doth give thee here no jot of blood;
The words expressly are ‘a pound of flesh’
Take then thy bond, take thou thy pound of flesh;
But, in the cutting it, if thou dost shed
One drop of Christian blood, thy lands and goods
Are, by the laws of Venice, confiscate
Unto the state of Venice.

The Merchant of Venice, Act IV, Scene I

Marchetta manages to pull off the fantasy world very well. It can be a struggle, making places believable, and I often find with fantasy that sometimes the names can sound down right cheesy. Many of the names in the book are altered versions of real life names, to give them a more fantastical feel, and this works well. Although there are not many descriptions of landscapes, nor a massive history bear that which is relevant to the main story, for a fantasy that is more about the characters and their personal journey than the world in which they live, Skuldenore is wonderfully built.

This post is part of The Journey Home, a celebration of the Lumatere Chronicles hosted by Bookish Whimsy and A Novel Idea.