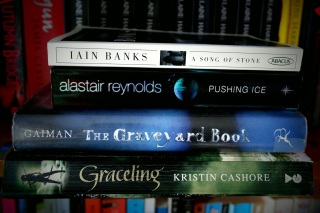 And now to show you the amazing parcel that Hodderscape sent me, as prizes for Sci-fi Month giveaways…

A signed copy of Red Moon by Benjamin Percy, Terminus by Adam Baker, an uncorrected proof copy of She Who Waits by Daniel Polansky (which isn’t even on Goodreads yet!) and Under the Dome by Stephen King, as well as lots of bookmarks!
You’ll have to wait until November for details on how to win these, but until then you can learn more about Sci-fi Month here.