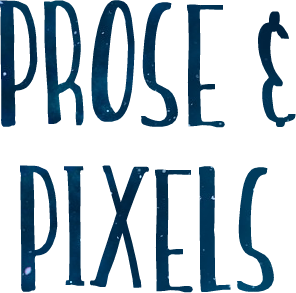 Prose & Pixels is a feature that combines two of my loves: books and video games. Here I’ll discuss all sorts of things to do with the two, whether it’s recommendations, influences or just a good old chat.

Today I want to introduce some video game series, and their novelisations.

This post is mostly aimed at people who are new to video games, or those who are interested in playing but don’t know where to start. I’m listing some well-known series, as well as their novelisations, in case you want to try the books out too!

Because you get to be an assassin? Also, meeting various historical figures like Leonardo Da Vinci, the Borgias and the Sforzas (Caterina Sforza even quotes her infamous line) and Niccolo Machiavelli is amazing. The digital versions of locations like 15th century Venice and 16th century Rome are also gorgeous. And did I mention you get to be a super stealthy assassin?

All of the following are by Oliver Bowden: Renaissance, Brotherhood, The Secret Crusade, Revelations, Forsaken and Black Flag.

A series of games that explores the idea of a dystopia/utopia. In Bioshock and Bioshock 2 (which I have previously discussed), the player ends up in an underwater utopia known as Rapture. Unfortunately, the city isn’t quite what it once was, and is now filled with drug-addled mutants, psychopaths and terrifying hulking creatures known as Big Daddies. In Bioshock Infinite, the third game in the series but the first chronologically, the player finds themselves in a seemingly utopian city floating in the sky. Booker, the player character, has been instructed to rescue a young girl who is imprisoned there in order to pay off his debts. However, how it always is with these sorts of places, things are not quite what they seem…

In regards to the first two games: because they’re scary and so, so immersive, you may be terrified but you’ll keep ploughing on! As for Bioshock Infinite, it is an absolutely BEAUTIFUL game with a mesmerising (and heartbreaking) story.

A trilogy set in the future, where the human race have discovered faster than light travel – and many, many alien races. The player assumes the role of Commander Shepard, a completely customisable character who can be either male or female. During the first game, Shepard must stop a rogue by the name of Saren from taking over the galaxy with an army of sentient mechanised beings, called the Geth. However, Shepard soon discovers that there is a much bigger threat on the horizon – an alien race known as the Reapers, who purge all life in the galaxy every 50,000 years, and their deadline is fast approaching. Through his or her journey, Shepard builds up a loveable squad to join them aboard the SSV Normandy, not all of whom may survive the mission…

Mass Effect is my favourite game series for so many reasons. But the main reason is that you are in control of every choice Shepard makes – and whatever you choose may have a permanent effect on the world, the galaxy, the universe – forever. Let that planet die and it’s gone, its people wiped out, no more resources, nothing. Betray that squad mate and that’s it – they’ve left you, never to return. Every choice you make has a consequence, whether it be bad or good. Not to mention that every single character is fantastically created, and you feel a genuine connection with each and every one. This video game makes me cry, and I’m not ashamed to admit it.

There are both novelisations and graphic novels for Mass Effect: Revelation, Ascension and Retribution by Drew Karpyshyn, Deception by William C. Dietz, Redemption, Evolution, Invasion, Homeworlds and Foundation by Mac Walters (graphic novels).

I’ll be doing a couple of posts of this type, look out for Dragon Age, Deus Ex and Halo in the next post!

Are you new to video games, or have you played any of these? Have you read any of the novelisations?