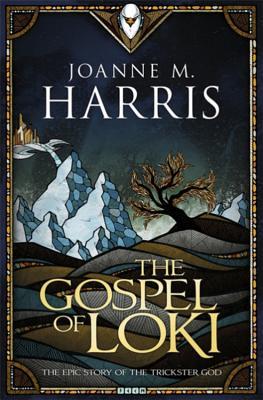 I cannot get enough of books based on ancient mythologies or cultures. I’ve devoured countless books on ancient Greece and Rome, the Olympian Gods, the Trojan War… but as you can see, the reading is often focused on one specific area of history. A fascination with the myths and legends of all over the world has followed me all my life; even those cultures of which I know little are endlessly astounding. Norse mythology sits somewhere in the middle. Whilst I know more about it than say, the stories of ancient Babylon, I know a Hel (harhar see what I did there… I’m so sorry) of a lot more about those of ancient Greece or Rome.

So it was with great delight that I spotted The Gospel of Loki on Netgalley. A book narrated by the trickster god of the old Norse pantheon certainly sounds like an incredibly unique premise, and I’m sure the recent releases of Avengers Assemble and the Thor films have piqued people’s interest in this particular deity (but PLEASE don’t go into this book expecting to see Marvel-Loki. I don’t know why you would… one is a comic book character, the other an old god.)

But anyway. If you’re interested in this book but know nothing about Norse mythology, then there is no need to worry – the author (or rather Loki) provides a handy guide to the various characters at the very beginning, as well as setting out the origin story of the religion. From the cover (which is absolutely gorgeous), I was expecting something quite heavy and traditional, but in actual fact Loki’s tone of voice is light and witty, and he even uses frequent colloquialisms and slang. Although I did feel like phrases such as ‘Yours Truly’ and ‘so shoot me’ were used a little too often, I loved Loki’s narration through the various legends of the old Norse religions. He may be arrogant, thoughtless and the ultimate trickster god, but at times I actually felt a little sorry for him. Unlike the other deities, Loki was not born into the family, but adopted as Odin’s brother. From the very beginning the others regard him as untrustworthy, what with him previously being a demon and a bit tricksy, and yes sometimes he deserves their hostility – but actually, there were times where he was treated rather unfairly and the other gods felt more like the demons.

What I most enjoyed about this book was the humour – and I think that is what it will make it so accessible to many different types of readers. It could have been a stuffy book about the myths and legends of Scandinavia, but with a brilliantly clever twist of Loki as the narrator, and his wonderful sense of wit, it both teaches and entertains. The casual weaving of modern day slang with these ancient epics gives it a timeless feeling. At some times it feels like a big family drama, with all the little (and not so little) arguments between the various gods!

Taking most of its inspiration from the legends of the Poetic Edda and Prose Edda, The Gospel of Loki is a gorgeous ‘retelling’ of ancient myths, that feels both timeless and modern, with a brilliantly unique viewpoint.

Like me, Ron is impressed. I told myself I wouldn’t use a Marvel-Loki gif so… err… yeah. This seemed appropriate.
Advertisement

12 thoughts on “Review: The Gospel of Loki by Joanne M. Harris”